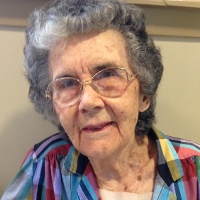 Mrs. Wilson was a former resident of Walton and Washington County, Florida.  She was Baptist by faith and a member of Ebro Baptist Church.  She was strong in her faith, encouraging her family to live a Christian life as she set an example before them.  She was a devoted wife, mother, sister, grandmother, and great grandmother.  She worked as a registered nurse and later became a nurse practitioner, for over 30 years before retiring.  Having worked for Dr. James Craven and Washington County Health Department in Chipley, Florida, and also Walton County Health Department in DeFuniak Springs.  She was a talented cook enjoyed growing flowers and vegetables.

Burial will be held at Red Bay Cemetery.